Problems with the thyroid gland? 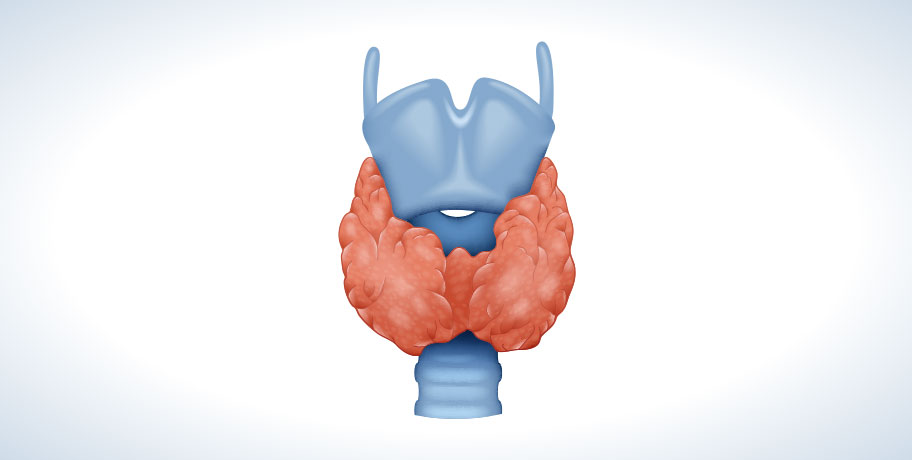 The thyroid gland, or Glandula Thyroidea as it is called in Latin, is a hormone-producing gland located in the throat just below the larynx. The thyroid hormones regulate several important functions in the body, such as metabolism, the body's heat production and calcium metabolism. If the thyroid gland produces is not producing enough hormones, it will cause a state known as Hypothyroidism. It produces too many hormones it will cause Hyperthyroidism.

The following is advised for thyroidal problems:

When the thyroid gland produces too much thyroid hormones, the body's metabolism will go into overdrive. Hyperthyroidism, thyrotoxicosis, goitre and Basedow's disease (Graves' disease) are all conditions caused by the overproduction of thyroid hormones. Basedow's disease is an autoimmune disease where the antibodies inherent in the bloodstream do not suppress, but rather stimulate, the operation of the thyroid gland, leading to an overproduction of thyroid hormones. Patients suffering from any kind of hyperthyroidism are often fatigued but have a hard time coming to rest. Restlessness, nervousness, cold perspirations even when it is cold, palpitations and tremor are not uncommon. Constant hunger and being underweight despite a large food intake are also symptoms of hyperthyroidism. Patients suffering from hyperthyroidism can also have looser stool, high blood pressure, feeling blear-eyed and that the eyes are sensitive to light and wind.

There are several levels of too low thyroid hormone production: The primary level and the secondary level. Regardless of whether the patient has primary, secondary or just a minor reduction in thyroid gland functionality, the symptoms can be many and difficult. Some of the ailments associated with hypothyroidism include fatigue, feeling cold, memory problems, constipation, increased need for sleep, reduced metabolism, hair loss, dry hair, brittle nails, muscle cramps, insomnia, overweight (occasionally also underweight), reduced ability to sweat, reduced pulse, but even symptoms such as depression and suicidal thoughts can occur as a result of reduced thyroid functionality. Unfortunately, these symptoms are more or less vague, and it is not always that blood samples will provide a definitive answer to whether the patient has thyroid problems or not. Hypothyreosis are therefore never detected for many patients in the health care system. However, the symptoms never lie. In order to know what to do to make things easier for the thyroid gland, one first has to understand its functionality.

The functionality of the Thyroid Gland

Hypothalamus in the brain gets information on the levels of thyroid hormones in the bloodstream. Based on this input it sends a small or large amount of the hormone TRH to the brain's pituitary gland. The pituitary gland then produces another hormone called TSH (thyroid-stimulating hormone) which is sent to the thyroid gland, giving the signal to produce the prohormone thyroxine (T4) as well as the active thyroid hormone tri-iodine-tyrosine (T3). Most of the T4 is converted in the liver into T3. The kidneys, muscles and brain can also convert T4 into T3. The thyroid hormone T3 is then transported into the individual cell, where it tells the cell at which rate to set the metabolism in order to uphold a fundamental metabolic pace in the body. Since cells, when producing energy, also produce heat, an underproduction of thyroid hormones will also give a lower energy production and therefore also a lower heat production. This is the reason why those with hypothyroidism feel cold. When the levels of T3 and T4 in the bloodstream are low, the hypothalamus in the gland will, as mentioned, through a so-called "negative feedback", influence the pituitary gland to produce more TSH in order to make the thyroid gland produce more thyroid hormones. The opposite is also true, that is when the levels of T3 and T4 in the bloodstream are high, the hypothalamus will signal to the pituitary gland to lower production of TSH and thus lower the production of thyroid hormones. The levels of thyroid hormones do not vary that much on a daily basis, but more on a weekly basis. This can be a reason why patients feel a thyroid hormone-related fatigue when the seasons change since the thyroid gland has trouble keeping up with the changing temperatures.

Regular hypothyroidism is characterised by increased levels of TSH, as well as by low levels of T4 and T3. TSH levels are increased since the pituitary gland is trying to make the thyroid gland produce more thyroid hormones. The most common reason for underproduction of thyroid hormones is, according to conventional medicine, an autoimmune disease causing antibodies to destroy the tissue in the thyroid gland, causing T4 not to be produced at the proper rate. Other potential reasons include iodine deficiency or a problem with the pituitary gland, which is therefore also a problem with TSH production. Temperature changes also affect the thyroid gland, which has to adjust its hormone production to different temperature levels, this however usually corrects itself within a matter of weeks.

Conventional health care almost always diagnosis hypothyroidism with a blood sample measuring the levels of T4, T3 and TSH. If TSH, T4 and T4 all show normal levels, the patient is not considered to suffer from hypothyroidism no matter how many symptoms there are. Blood samples can, however, be a pretty blunt tool for diagnosing the thyroid gland. Urine samples are considered more reliable since it can show subclinical hypothyroidism which is not discovered through blood samples.

The hormonal medicine Levoxine is used in Sweden to treat hypothyroidism. If a patient is suffering from iodine deficiency, the medicine can worsen the condition as it increases the body's need for iodine and thus reduces the iodine levels in body tissue's. Before taking Levoxine, it is advisable to do a checkup on the iodine level. If there is an iodine deficiency, there is a risk that no symptoms will improve with a Levoxine treatment; the symptoms can even become more severe. This applies both to hypothyroidism from an autoimmune disease and to hypothyroidism with other causes.

The thyroid gland and nutrition physiology

Negative stress is, as most people know, not good for the body's various functions in general, but it is particularly bad for the thyroid gland. The enzyme used to convert T4 into T3 is impeded by cortisol, which is formed during stressful situations. Cortisol is an important hormone, produced by the adrenal glands in order to manage occasional stressful situations. When the stress turns chronic and the body produces too much cortisol during too long a time span, the thyroid gland is affected very negatively. The state of the adrenal and thyroid glands are intimately linked, which can make treatment situation harder. Medication with thyroid hormones can in a worst-case scenario not give any results or worse results than expected in regarding the treatment of the symptom if the adrenal glands do not function as they should. It can then be necessary to test both adrenal glands and the thyroid gland and treat both simultaneously. Stress reduction and stress management are very important to be able to handle the thyroid problems but also to handle the functionality of the adrenal glands. Read the article on adrenal glands here.

Every day you stand in front of multiple options which can either improve or degenerate the state of your health. Start today and remember that health isn't something which comes to you suddenly; it is the fruit of conscious decisions made daily, one step at a time, and during thyroid ailments a first step can thus be: